Welcome to the Buchan Caves Reserve

Buchan Munji, the Buchan caves region, was traditionally an important meeting place for our people. The area connects to the high country and was a place of refuge during the seasonal migrations to and from the mountains, where our mob would go to chase the Bogong Moth and other food sources.

Although Gunaikurnai people did not traditionally venture very deep into the limestone caves, there is evidence going back more than 18,000 years of the important role they played in the lives of our Old People, including burial sites and ceremonial rings all through the Buchan area.

Recent research suggests that caves were frequented by magical practitioners called mulla-mullung. They trained and practised their magic, using crystals and other stones, and ground powders such as ash.

Today the caves remain important to Gunaikurnai as a meeting place with spiritual significance that holds important stories to be shared with young people.

The Buchan Caves Reserve is one of the ten jointly managed parks and reserves within Gippsland.
The Joint Management Agreement recognises the fact that the GunaiKurnai people hold Native Title and maintain a strong connection to Country. As custodians of the land, they are the rightful people who speak for their Country.
These parks and reserves are cultural landscapes that continue to be part of GunaiKurnai living culture.

The Parks Victoria website has more information about visiting Buchan Caves Reserve including things to see and do, accessibility and current change of conditions

Evidence in the broader Buchan region indicates the important role of caves to our people going back thousands of years.

Archaeological evidence of GunaiKurnai use of the area remains along the Spring Creek valley and in artefact scatters throughout the reserve. A number of quarry and artefact scatter sites have also been recorded.

Our oral history holds that Frank Moon’s party, which made the first documented exploration of the Buchan caves, was guided by local Gunaikurnai people, who were not acknowledged.

There are other culturally important cave sites in the vicinity that are not within the reserve, including Cloggs Cave, located on private property to the southeast. The cave has an undisturbed cultural sequence dated to around 30 000 years, with bone and stone tools being uncovered in excavations. 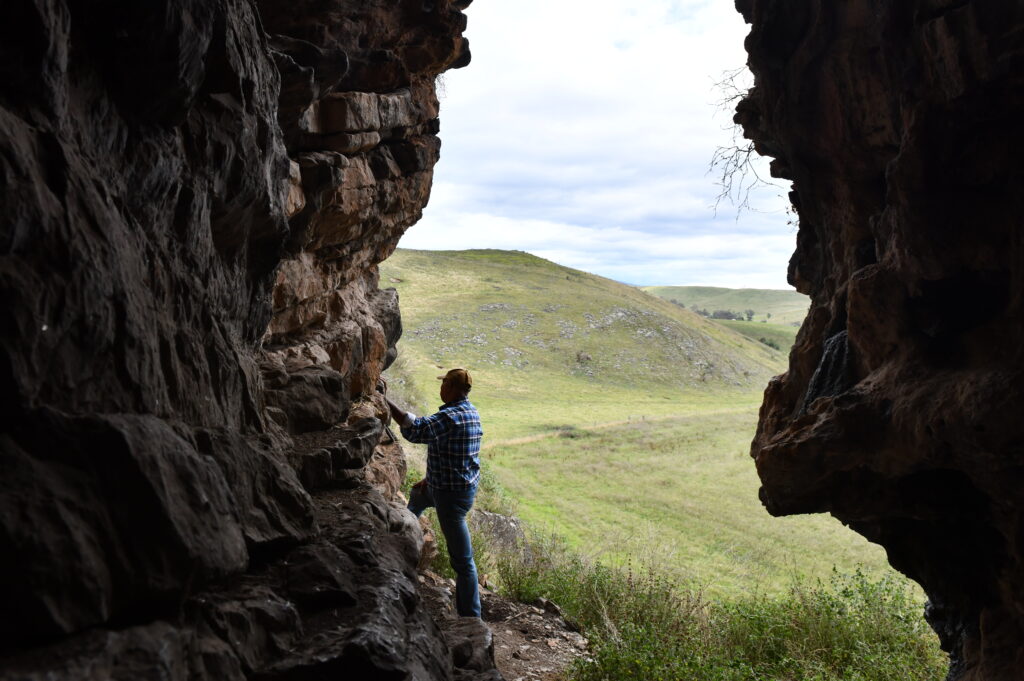 The Fairy–Royal–Federal–Dukes cave system within the reserve is approximately one kilometre long and contains spectacular stalactite and stalagmite formations, pillars, shawls, rim pools, cave sediments and a permanent flowing stream (Rosengren and McRae-­‐Williams 1981). It is part of a large outcrop of cave and karst-­‐forming limestones known as the Buchan–Murrindal cave system, which extends beyond the reserve. This is one of the most extensive cave systems in Victoria, containing between four and five kilometres of stream passage, cut at several levels and widened in places into caverns by block collapse.

The limestone rock at Buchan was laid down about 380 million years ago under shallow seas that covered much of East Gippsland. Vertical joint lines across the layers of limestone allowed water to seep through the rock, dissolving the limestone to form the caves. Water dripping from the ceiling of the caves and then evaporating, deposited calcite, forming stalactites and stalagmites. There are numerous fossils in the limestone.

Bats inhabit some caves in the reserve. They are known to use caves in the area for overwintering and roosting, but recent survey and monitoring data is limited. Cave invertebrates were surveyed in the 1980s (Yen and Milledge 1990), but there is no current data on their presence and condition.

Buchan Caves Reserve covers 295 hectares on the Buchan River at the township of Buchan (population approximately 150), 57 kilometres north of Lakes Entrance. Most of the reserve is covered by forest and woodland. Prior to the grant of Aboriginal Title the reserve was set aside for public purposes and the protection of natural features.

Some of the best cave formations in Victoria are found in the Buchan Caves. The caves are part of the Buchan–Murrindal cave system, a large outcrop of cave and karst-­‐forming limestones extending beyond the reserve boundary. This is one of the most extensive cave systems in Victoria, containing between four and five kilometres of stream passage cut at several levels and in some places widened into caverns by block collapse.

There is evidence of GunaiKurnai burials dating from the Pleistocene era in some cave entries in the area around Buchan, outside the reserve.

The reserve is also significant for its modern history and the development of cave tourism. It is one of East Gippsland’s major tourism attractions, attracting a large number of visitors from interstate and overseas.

The Gunaikurnai Whole of Country Plan (GLaWAC 2015) sets out the following management priorities for the reserve:
• establishing cultural business and training enterprises around tourism and education
• ensuring that all non-­GunaiKurnai people working in the Buchan Caves area undertake cultural awareness training
• taking a more active role in the administration of visitation and receiving commensurate income from camping and other fees.

While recognising these priorities, the JM Plan sets out actions that are consistent with and limited to the terms of the 2010 Recognition and Settlement Agreement. Parks Victoria operates well-developed tour and accommodation booking systems and cave guiding services, and also sells food and merchandise.

The main changes to take place as part of joint management of the reserve are:
• the establishment of Buchan Caves as a primary training and development location for Gunaikurnai people to acquire and build skills in tourism, hospitality, and commercial business operations; and
• the development of new programs and activities for visitors that are built on Gunaikurnai cultural heritage themes, as part of ongoing improvements to the visitor services and experiences in the reserve.
The partner agencies will explore how the revenue from these operations can be applied within the overall resourcing of joint management.