Acknowledgement and cultural awareness of the Welcome to Country tradition and associated cultural traditions, enables GunaiKurnai people to fulfil our responsibilities with respect to the land and to maintain and strengthen our culture.

Under our traditional laws and customs, the Gunaikurnai people have a responsibility to welcome visitors to Country – by fire, smoke, water ceremonies and with other specific cultural details including language, customs, protocols, relevant dreaming stories etc.

All requests to conduct a Welcome to Country within the GunaiKurnai RAP Area are to be made through the GLaWAC Cultural Hub.

If you are interested in our cultural services please ensure that you read the FAQs below before you book, and feel free to contact the Cultural Hub on 5152 5100 to discuss the most appropriate ceremony for your event, subject to availability. 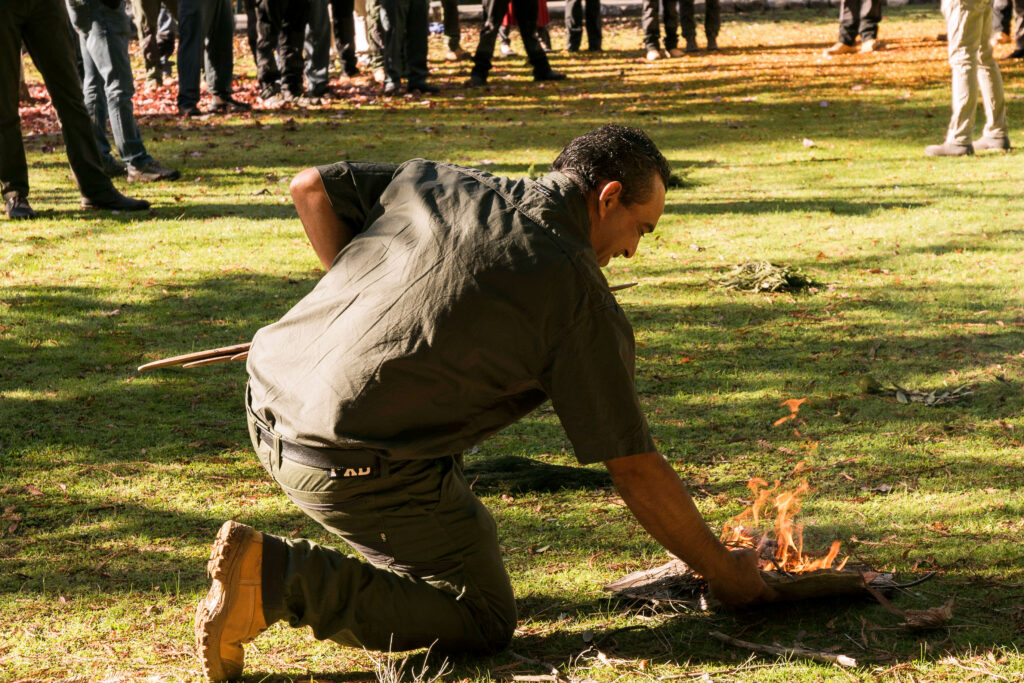 Welcome to Country is a way of recognising and paying respect to our people as well as acknowledging our ongoing connection to Country.

It is a ceremony performed by an Elder, or an appropriate person nominated as a GLaWAC representative*, as an oral welcome where visitors are greeted and traditionally offered safe passage through our land.

Each Welcome to Country is unique, reflecting cultural protocols and the experiences of the attending Elder, and should be afforded the appropriate respect.

*Please read below for more about how to respect ceremony

A Smoking Ceremony is an ancient custom that involves smouldering various native plants to produce smoke with cleansing properties to ward off any bad spirits.

When booking a Smoking Ceremony, a Welcome to Country is included.

Please note that a Smoking Ceremony is not always appropriate for an event. Requests may need to be discussed with Cultural Hub before confirmation is given.

A Gunaikurnai representative will come and talk about Aboriginal history, culture and heritage. This session is for ½ an hour. Sessions can be arranged at another location however, travel costs would be incurred.

A Cultural Heritage presentation by a GLaWAC representative educating the knowledge and understanding of the Gunaikurnai culture. This session includes a presentation in-house at GLaWAC office and a field trip to a place of significant (on-Country).

Sessions can be arranged at another requested location however, travel costs would be incurred.

It is considered respectful protocol to engage with Traditional Owners to discuss the use of traditional language, planned or existing projects, research or other initiatives that occur on their lands.

Many stakeholders are interested in engaging with Traditional Owners and the best way to achieve this is through a respectful consultation process.

The Cultural Hub can facilitate an engagement process for stakeholders to engage in meaningful dialogue with the GunaiKurnai about the use of traditional language, planned or existing projects, research or other initiatives that occur on Gunaikurnai Country.

The Victorian Constitution and the Charter of Human Rights and Responsibilities

Conducting Welcome to Country and acknowledging Gunaikurnai people as the Traditional Owners of the land provides a means for publically recognising the prior and continued ownership of the land by Gunaikurnai people. Public recognition of our status as Traditional Owners reflects the acknowledgement by the State of Victoria, in its constitution, that the establishment of the Colony of Victoria as a self-governing colony with responsible government occurred without proper consultation, recognition or involvement of the Aboriginal people of Victoria. In this respect, the public recognition of Gunaikurnai people as traditional owners provides a measure of justice to our people who were unlawfully dispossessed of their land.

Conducting Welcome to Country and acknowledging Gunaikurnai people as traditional owners is also necessary to ensure our people receive equal protection under the law of Victoria, a human right guaranteed to all Victorians under the Victorian Charter of Human Rights and Responsibilities. The Charter also recognises the special importance of human rights for the Aboriginal people of Victoria, and that Aboriginal persons hold distinct cultural rights with other members of their community.

These rights include the enjoyment of our identity and culture, the maintenance and use of our language, the maintenance of our kinship ties and the maintenance of our distinctive spiritual, material and economic relationship with the land and waters and other resources with which we have a connection under traditional laws and customs. Conducting a Welcome to Country and acknowledging Gunaikurnai people as Traditional Owners is necessary to enable the realisation of these cultural rights and to promote the health and well-being of Gunaikurnai people generally, recognising that cultural survival is a key determinant of the health and well-being of Indigenous people.

This protocol is applicable to all cultural ceremonies within Gunaikurnai region including Welcome to Country, acknowledgements of the Gunaikurnai people as the traditional owners and cultural awareness programs that occur within our Agreement Area.
The protocol is between the State of Victoria and Gunaikurnai Land and Waters Aboriginal Corporation (‘GLaWAC’) and applies to all State agencies, statutory authorities and their service providers. Local government, the Commonwealth and Commonwealth statutory authorities and agencies are also encouraged to adopt the Protocol as are private businesses and commercial operations.

When is a Welcome to Country to be conducted?

A Welcome to Country is to be conducted for all major official events occurring within the Agreement Area, where members of the public, representatives of government and/or the media are present unless determined by GLaWAC to be inappropriate.

Such events may include but are not limited to:
i. community Cabinet meetings and Parliamentary committee sittings;
ii. commemorations and major festivals;
iii. major launches of government policies and programs;
iv. conferences held or sponsored by the Victorian Government;
v. international events of which the Victorian Government is an organiser or sponsor;
vi. citizenship ceremonies; and
vii. major and international sporting events.
viii. major and international artistic events including exhibitions and performances
ix. events at schools and educational institutions

At events which are not official events, but where a State government body or agency is a sponsor, the relevant body or agency should facilitate negotiations with GLaWAC and the event organiser to incorporate a Welcome to Country into the event, where GLaWAC holds the view that this is appropriate.

Other private organisations or members of the public may also request that a Welcome to Country be conducted.

Who is to conduct a Welcome to Country or Traditional Ceremony?

A Welcome to Country or Traditional Ceremony may only be conducted by an Elder or persons deemed to be appropriate by GLaWAC. GLaWAC is committed to engaging members across all family groups in cultural heritage work when determining who is an appropriate person.

A business, agency or community group may request that a particular Traditional Owner perform the work if they have a relationship with them. All reasonable attempts will be made to meet their request, however, if no request is made then GLaWAC will select a person suitable for the relevant event.

Respecting a Welcome to Country or Traditional Ceremony

The Cultural Hub invite you to consider why you have booked or attended a traditional ceremony and ask that you remain respectful and show your appreciation at the end of the ceremony.

Notice required when requesting a Traditional Ceremony or Cultural Education

A request made to GLaWAC, to conduct a Welcome to Country, traditional ceremony or cultural education must be made with a minimum of two (2) weeks prior to the date of the event at which the ceremony is to be conducted. Where the required notice is given, GLaWAC is to respond to the request within a reasonable time. This time will be no less than two (2) business days after the initial request.

Cultural consultations may require more than one meeting and the consideration of Elders and community. We request your understanding that these matters may take several weeks, and occassionally beyond a month, to be determined.

Fees involved in conducting a Traditional Ceremony or Cultural Education

Where GLaWAC approves a request to conduct a traditional ceremony or cultural education/consultation, it will advise those making the request of the relevant fee involved. Fees for conducting a traditional ceremony or cultural education are listed above and reviewed annually. Where work is cancelled within 48 hours of the scheduled event, GLaWAC will charge 50% of the rate, with field workers booked being paid appropriately.

All fees are subject to 10% GST and will be charged accordingly.

Can I film or photograph a Traditional Ceremony?

A traditional ceremony is an individual expression created by the person conducting it and due respect should be given to its intent at all times.

A cultural service is generally not for public broadcast (this includes social media). Requests to film/photograph a traditional ceremony should be made when booking a cultural service.

Please note that a request does not guarantee approval.

Acknowledgement of the Gunaikurnai as Traditional Owners

As a base, the following words should be used when acknowledging the Ancestors of the Gunaikurnai people as the Traditional Owners:

“I would like to acknowledge the Ancestors of the Gunaikurnai People, the Traditional Owners of the land on which we are gathered and pay my respects to their Elders both past and present and emerging leaders”.

Due to high demand, Cultural Awareness Sessions are currently booked out until May, 2022.

Please consider this when completing your booking form.

GLaWAC appreciate your interest and are working to accommodate all requests in a timely manner.