The Lakes National Park is recognised as an internationally significant wetland, playing an important role in providing habitat for migratory bird species… Rich in wildlife, they are home to several of our totem species as well as a number of rare and endangered species… There are shell middens all along the sand dunes…

The Gippsland Lakes Coastal Park is part of the Gippsland Lakes system which has traditionally been a major food source for our people. Evidence of our use and occupation is visible in the many midden sites, artefact scatters and scar trees within the park… The waterways and lakes system were our transport network — our ancestors would use bark canoes to move from one spot to another.

The Lakes National Park and Gippsland Lakes Coastal Park are two of the ten jointly managed parks and reserves within Gippsland.
The Joint Management Agreement recognises the fact that the Gunaikurnai people hold Native Title and maintain a strong connection to Country. As custodians of the land, they are the rightful people who speak for their Country.
These parks and reserves are cultural landscapes that continue to be part of Gunaikurnai living culture.

The Parks Victoria website has more information about visiting The Lakes National Park and Gippsland Lakes Coastal Park, including how to get there, things to see and do, accessibility and change of conditions

The Gunaikurnai have a deep, longstanding connection with both parks and the adjacent waters. The lake waters in particular were abundant in food sources and in resources. Fishing, camping, hunting and gathering were daily activities of the Gunaikurnai. Bark canoes were used on the lakes system. People travelled to the open ocean from this area harvesting food and materials, and moving up and down the coast.

A number of currently used place names for this general area originate or are derived from traditional Gunaikurnai place names, such as Boole Poole, Bunga Arm and Nyerimilang.

The Gippsland Lakes were once part of a larger bay open to the sea. Sperm Whale Head, Little Rotamah Island, the Ninety Mile Beach, Boole Poole Peninsula and Rotamah Island were formed by sands deposited by the seas over thousands of years. These landforms now enclose the waters, some of the barriers being up to thirty-­eight metres high. 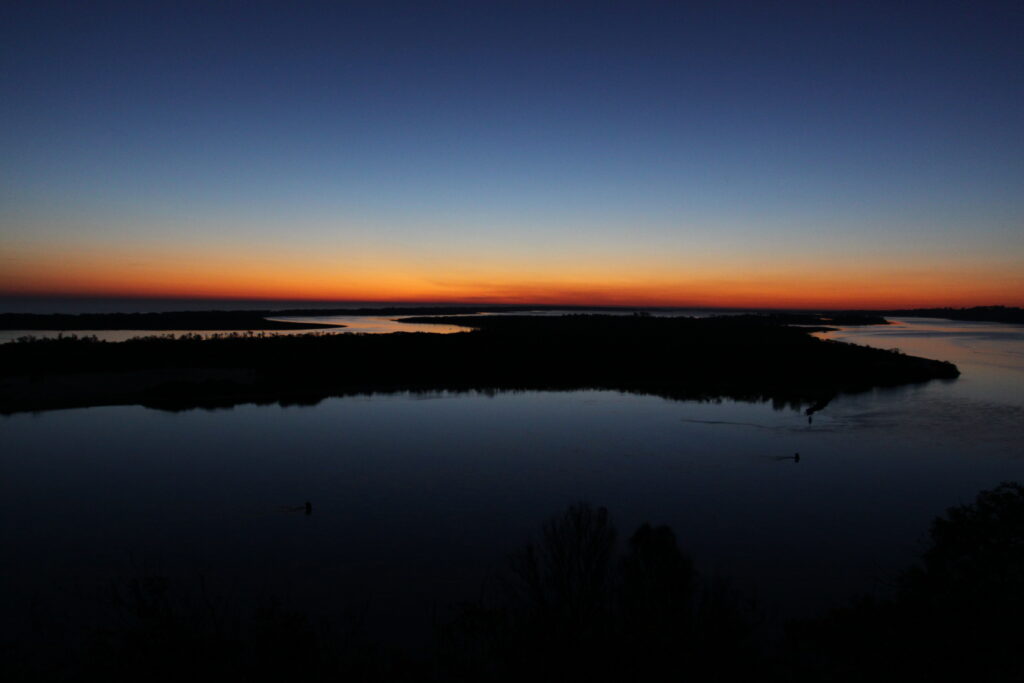 The Lakes National Park covers 2389 hectares and is located on the Gippsland Lakes, 63 km east of Sale. The park is bounded by Lake Victoria, Lake Reeve and the township of Loch Sport. It contains large areas of diverse and relatively undisturbed flora and fauna communities that are representative of the inner barrier of the Gippsland Lakes System. Sperm Whale Head Peninsula, Rotamah Island and Little Rotamah Island are within the national park. Sperm Whale Head National Park (1451 ha) was first declared in 1927 and subsequently scheduled under the National Parks Act 1956 (Vic.) as The Lakes National Park. Rotamah and Little Rotamah Islands were added to the park area in 1978 because of their coastal geomorphological significance.

The 17,688 hectare Gippsland Lakes Coastal Park stretches 90 kilometres along a narrow strip of coastline from Seaspray to Lakes Entrance. It was proclaimed in 1979 with additions in 1997, 2001, 2010 and 2012, and takes in extensive coastal dune systems, woodlands and heathlands.

The coastal park also includes a significant area of water, described in the plan as Waters of the Gippsland Lakes Coastal Park, including Lake Reeve and Bunga Arm. Lake Reeve is a narrow, shallow water body adjacent to the coastal dune barrier, and often dries out. It has been listed under the Ramsar Convention as a wetland of international importance for its waterfowl habitat.

The parks contain sites of national, State and regional geological and geomorphological significance, mainly associated with the evolution of the sandy barrier system and the coastal lagoons that make up the Gippsland Lakes. These formations include Lake Reeve, Sperm Whale Head, Boole Poole Peninsula, Bunga Arm, the Outer Barrier and Ninety Mile Beach.

At the time of European settlement, the Gippsland Lakes were linked to the sea by an intermittent entrance. Sand deposition closed the entrance during low river flow until high river flow raised the level of the Lakes and breached the sand barrier. An artificial entrance was opened in 1889 to improve boat access into and out of the Lakes system.
This resulted in reduced fluctuations and a general lowering of the Lakes’ levels, thereby changing the flooding regime of the bordering swamps. The salinity of the Lakes’ water also increased, causing extensive dieback of Common reed beds along the shorelines. Without the protection of the reed beds, shoreline erosion became extensive and widespread.

The Lakes National Park and the Gippsland Lakes Coastal Park are part of the 58,800 ha Gippsland Lakes Site of International Significance, listed under the Convention on Wetlands of International Importance (known as the Ramsar Convention) for the conservation and wise use of wetlands. The listing recognises the terrestrial and aquatic ecosystems of the wetlands and their importance as habitat, particularly for migratory birds and other wildlife.

The Gippsland Lakes Ramsar Site Management Plan sets out specific actions for management. There is a need to ensure coordination of the directions and implementation of the Ramsar Site Plan and this management plan for the parks. Eastern Boole Poole contains land of conservation and cultural significance that is currently in private ownership including private land that surrounds Hidden Lake which is part of the Gippsland Lakes Coastal Park.

The Lakes National Park and the Gippsland Lakes Coastal Park are on the Country of the Tatungalung clan.

The core of The Lakes National Park around Sperm Whale Head is one of the earliest areas established as a national park in Victoria and has therefore been managed as a conservation landscape for many years. The Gippsland Lakes Coastal Park was proclaimed more recently and had a previous land-use history of farming, grazing, oil exploration and many other activities that have left their mark on the land.

Parks Victoria and its predecessor park management organisations have worked systematically over several decades to restore the park’s natural environment and to establish sustainable recreational use by large numbers of land and water users.

Joint management brings a continuing emphasis on nature conservation and recreation, but an increased focus on cultural values and site protection.

The Gunaikurnai Whole of country plan sets out the following management priorities for The Lakes National Park and the Gippsland Lakes Coastal Park:
• limiting further development and undertaking stabilisation works to protect the sensitive dunes
• looking at re-­‐aligning the boundary of the park or management area to include cultural sites along the coast and out to sea
• strengthening our understanding of the area – researching and telling storylines and undertaking surveys
• research that looks into wildlife deaths in the area
• educating park users about significant places and culturally sensitive park use and ensuring tour operators and park workers undertake Gunaikurnai-­‐run cultural awareness training
• establishment of a sea ranger program, including boats for monitoring and compliance
• restoration of middens and other significant sites
• building more boardwalks to protect the dunes from erosion and preserve cultural sites, and monitoring visitor compliance.
While recognising these priorities, this plan sets out actions that are consistent with and limited to the terms of the 2010 Recognition and Settlement Agreement.

The rich food resources of the Gippsland Lakes—fish, shellfish, birds and plants—and the transport routes on the sheltered lake waters led to intensive occupation of the two parks by Gunaikurnai people over many generations. As a result, there are Gunaikurnai cultural sites throughout both parks. These sites are subject to disturbance from natural processes such as storms and wind erosion, as well as damage from development and recreational activity.

Future park operations under joint management will give much greater and earlier priority to cultural site protection and restoration in recognition of the change in land status arising from the grant of Aboriginal Title.

Historically State and regional land management policy for the Gippsland Lakes, including these two parks, has focused predominantly on environmental management including weed and pest control and water quality, and the substantial levels of recreation and visitor use have brought demands for visitor services and management of visitor pressures.
Investments in environmental and visitor management will continue in the future, under an approach that ensures that conservation of cultural values in the parks is an equally high priority.

Significant improvement in the condition of land and water in and around the Gippsland Lakes has been achieved over recent times. The pattern of visitor use in The Lakes National Park and the area of Gippsland Lakes Coastal Park east of Loch Sport is generally sustainable and underpins the important tourism industry and educational operations of the Gippsland Lakes.

The western section of the Gippsland Lakes Coastal Park, along the Ninety Mile Beach, is subject to very heavy visitor use in peak periods leading to unsustainable impacts on vegetation and cultural sites in the narrow dune strip around campgrounds.

Elsewhere the condition of the parks has improved in many respects but invasive animals, in particular, remain a major threat to the signature waterbird populations and habitats of the parks, especially on the Boole Poole Peninsula and along the Bunga Arm.

Joint management brings the additional knowledge of Gunaikurnai people together with the existing expertise and capability of Parks Victoria, DELWP, the West Gippsland CMA and others to the challenge of managing one of the most important landscapes in Victoria.