Welcome to the Tarra-Bulga National Park

Tarra-Bulga National Park is a central part of the Gunaikurnai creation storyline where Borun the pelican travelled, carrying his canoe, from the mountains in the north to the place called Tarra Warackel on the coast south of the park, now called Port Albert, where he married Tuk the musk duck and together they founded the five Gunaikurnai clans.

Tarra-Bulga National Park is a stronghold of virgin bushland in an otherwise cleared landscape. It is one of the last refuges of natural forest in the area and home to mountain ash trees, lyrebirds and wallabies as well as several species that have now largely disappeared from the rest of the region.

The significant remnants of old growth forest are characteristic of a period when only Gunaikurnai were present on the land, and is therefore an important reminder to us of what our Country was like in the time of our Ancestors.

Tarra-Bulga National Park is one of the ten jointly managed parks and reserves within Gippsland.
The Joint Management Agreement recognises the fact that the Gunaikurnai people hold Native Title and maintain a strong connection to Country. As custodians of the land, they are the rightful people who speak for their Country.
These parks and reserves are cultural landscapes that continue to be part of Gunaikurnai living culture.

The Parks Victoria website has more information about visiting Tarra-Bulga National Park, including how to get there, things to see and do, accessibility and change of conditions

The extent of Gunaikurnai occupation and use of the park has not been mapped, partly due to the priorities of earlier management as well as the difficulties of surveying the steep and heavily forested terrain. Experience from surveys of other forested parks in the Victorian Alps and Gippsland, conducted after large-­scale bushfires, suggests that evidence of Gunaikurnai occupation may prove to be more extensive than the paucity of existing records indicates, especially on ridges and streamlines that provided preferred travel routes.

A number of plant species are known to be culturally important for the Gunaikurnai.
Plants were important both for their practical uses and for cultural identity. For example, moeyang was traditionally an important species for making spear throwers, bathing rheumatic joints with the soaked bark, and making fishing lines from the inner fibres, and it was also prized for shields which were important for clan identity. 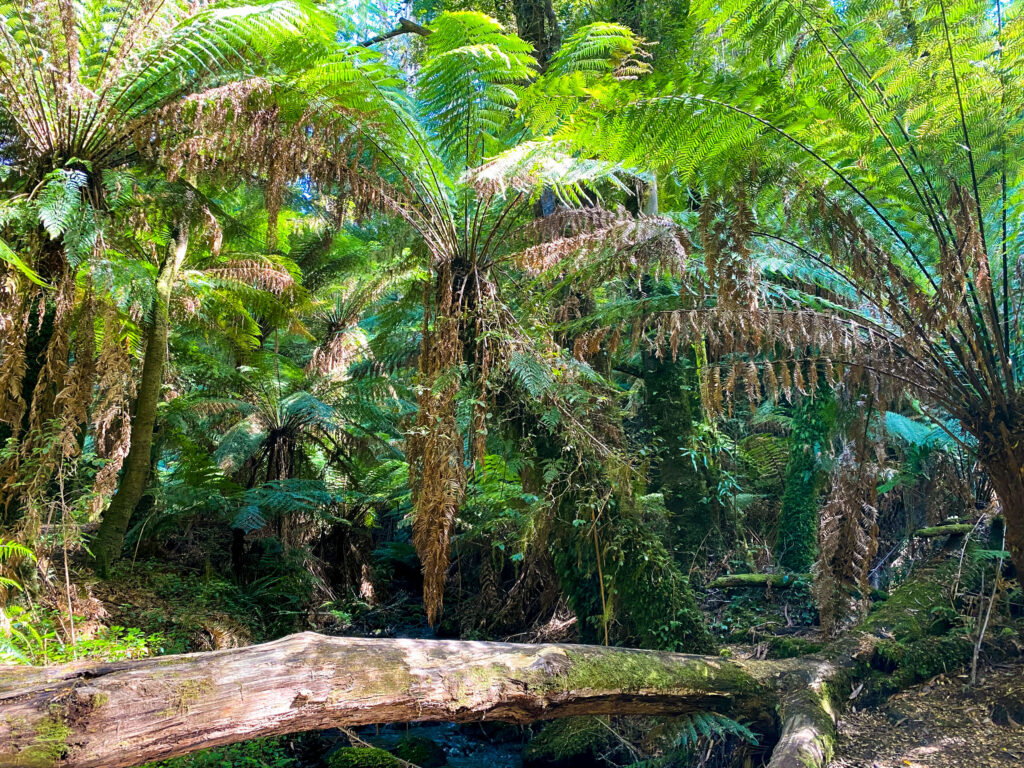 Tarra-Bulga National Park is one of several parks and reserves located in the ‘forest and mountain country’ of the Gunaikurnai RSA area. The park covers 2022 hectares of Mountain Ash forest and cool temperate rainforest in the eastern part of the Strzelecki Ranges of South Gippsland. It was proclaimed on 17 June 1986 under Schedule Two of the National Parks Act.

It is recognised by Gunaikurnai as a traditional place of gathering due to its topography as a high point of the ranges. The Alberton Shire Council initially reserved a small area of forest near Balook in 1904 to protect its fern gullies and a larger area in the Tarra Valley in 1909. The former was named Bulga – an Aboriginal word meaning mountain – while the latter was named after Charlie Tarra, an Aboriginal man who guided Paul Strzelecki and his party through Gippsland in 1840.

Various additions to these reserves were subsequently made. The decision to protect the two reserves as one National Park was based on Land Conservation Council recommendations to the Victorian Government for the South Gippsland Area, District 2 (LCC 1982).

Following a land exchange between APM Forests Pty Ltd and the Crown, an area of land linking the Tarra Valley and Bulga sections was added to the park in 1991, with a further addition in 2004. The park is listed in Category II (National Parks) of the International Union for the Conservation of Nature protected area categories and the United Nations’ List of National Parks and Equivalent Reserves.

Category II areas are large natural or near natural areas set aside to protect large-­scale ecological processes, along with the complement of species and ecosystems characteristic of the area, which also provide a foundation for environmentally and culturally compatible spiritual, scientific, educational, recreational and visitor opportunities.

The park contains three Ecological Vegetation Communities (EVCs), the standard unit for classifying native vegetation types in Victoria, as well as some previously logged areas and former cleared farmland. The topography of the park is characterised by enclosed valleys formed by narrow steep slopes with waterfalls and rapids along the watercourses.

The base rocks are fine-­grained Cretaceous sandstones with interbedded softer sands and siltstone. They contain a diverse and abundant fossil flora in the rocky outcrops with impressions of Taeniopteris and Sphenopteris fossil ferns and liverworts. These types of outcrops are rare and of State geological significance (Rosengren et al. 1981). Small areas of Tertiary basalts and conglomerates also occur. The steepness of the land led to some of the area being excluded from selection for farming prior to the creation of the park.

The endangered Cool temperate rainforest EVC is particularly significant. It is found in the wettest, most climatically fire-­protected niches and is almost entirely restricted to deeply dissected foothills, gully systems of mountain ranges and montane plateaus.

These are primarily along south-facing gullies, creeks and on south‐east facing slopes, where insolation is low. It can occur on river flats where rainfall is at its maximum. Cool temperate rainforest requires a high to very high annual rainfall of 1200–2000 mm and is largely restricted to environments where severe fire occurs at intervals greater than 400 years. This community has undergone a gross geographical decline, particularly in the Otways and Strzelecki’s
as a result of land clearing and the effects of fire and timber harvesting.

It is threatened by fires of high intensity and frequency which eliminate Nothofagus and other over‐storey species, allowing light dependent sclerophyll species to colonise, and if there are repeated fires, to replace the rainforest species. Approximately two hundred species of vascular plants have been identified in the park (Ashwell 1988; Beauglehole 1972) including 41 species of ferns of which four are significant, being the slender tree-­fern—listed as vulnerable under the Flora and Fauna Guarantee Act 1988 (Vic.)—Skirted tree-­ fern, Sticky wattle and Fairy lanterns.

Two hundred and eighty nine different kinds of fungi and non-­vascular plants such as mosses and liverworts have also been recorded. Although the park’s cultural values have not been systematically surveyed, it is known from assessments elsewhere in the joint management area that numerous plant species have cultural importance.

A total of 115 vertebrate fauna species have been recorded in the park of which nine are rare or threatened, including the South Gippsland spiny crayfish, the Strzelecki burrowing crayfish and the barking owl, all of which are endangered.

The park is located on the Country of the Brataualung clan of the Gunaikurnai. It lies on a central part of the Gunaikurnai creation storyline where Borun, carrying his canoe, travelled from the mountains in the north to the place called Tarra Warackel on the coast south of the park, now called Port Albert (GLaWAC 2015).

The forest provided resources, and the stream waters that flow from Tarra–Bulga would have been important, particularly in times of drought, as they are to the present-­‐day communities of South Gippsland. The cool temperate rainforest areas of the park are botanically rich and ecologically very significant due to their depletion in the broader landscape by land clearance, timber harvesting and large-scale bushfires in the region and other parts of eastern Victoria. They are now vulnerable to the drying and warming impacts of climate change, requiring conservation action not just inside the park but outside its boundaries, to buffer the park from severe bushfires and invasive plants and animals.

The Gunaikurnai Whole of Country Plan sets out the following management priorities for the park:
• preventing the park from being isolated by logging
• maintaining roads and tourist infrastructure to minimise the impact of heavy traffic
• reclassifying and managing unreserved areas in the middle of the park
• ensuring that the visitor centre actively promotes Gunaikurnai cultural values and involves Gunaikurnai people in the design of displays and audio-­visual material
• undertaking focused cultural mapping.
While recognising these priorities, this plan sets out actions that are consistent with and limited to the terms of the 2010 Recognition and Settlement Agreement.

The original reservation of the park and the conservation priorities prior to joint management have focused on the role of the park as a surviving remnant of the wet forests and rainforest that once covered much of South Gippsland. The history of timber cutting, the efforts to clear and establish farms around the park, and the campaigns of conservation activists to reserve the park have all been prominent stories in the protection and interpretation of the park for visitors.
The importance of Tarra–Bulga for Gunaikurnai people—over thousands of years and to this day— has been much less visible in park management and visitor information. Under joint management, the timeless connection of the Gunaikurnai people to the park will be made more visible and they will bring their traditional knowledge and present day practices and use rights into an active collaboration with land management agencies and community groups to protect and interpret all the features and stories of this magnificent place.

The park provides opportunities for the Gunaikurnai to increase and strengthen their connection to Country in a landscape characteristic of Country in its original and traditional condition. Joint management provides a renewed opportunity for Gunaikurnai people to hold community gatherings on Country, share lore, pass cultural skills and knowledge between generations, and meet cultural obligations to care for Country through conservation and restoration work. Tarra–Bulga National Park gives all who come to it an inspiring experience of giant trees, towering forest, lush fern gullies, rich wildlife and crystal clear mountain streams. Joint management brings the Gunaikurnai people into an active conservation and management collaboration with Parks Victoria, the community, scientists and neighbouring landholders, who all value the park in their own way.